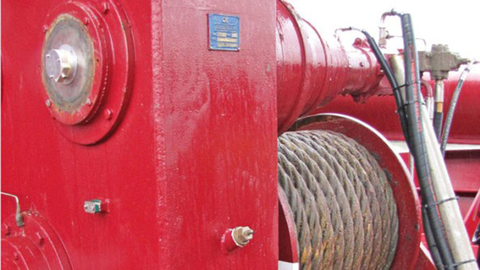 Previously, the rotary encoders on the winches of the Reimerswaal hopper dredger lasted less than one year due to the extreme stress they were subjected to on the high seas. The Dutch electrical engineering company eL-Tec therefore developed a wear-free solution for detecting cable winch rotation – using Turck’s QR24 inductive encoders.

The contactless encoder offers impressive performance, particularly due to its robust design. As the PROFINET connection is implemented with Turck’s BL20 multiprotocol I/O system, the crew on board can easily replace an encoder themselves.

A hopper dredger excavates sand and gravel from the sea floor and transports the material to its hold. One of the world’s largest trailing suction hopper dredgers with a dry discharge system is the Reimerswaal. The electronic controls and installation of the ship comes from the Dutch electrical engineering company eL-Tec Elektrotechnologie BV.

The central suction pipe is extended and guided by three steel cables that are wound in and out using electric winches. Three encoders on the winches detect the unwinding and winding of the steel cables on the Reimerswaal. Two other encoders are mounted on the cable winches that lower and raise the two spud poles at the fore and aft of the ship.

Frequent failure of magnetic encoders
Previously, all five winches were fitted with magnetic encoders with an integrated PROFINET interface. However, the encoders had to be replaced frequently due to mechanical faults, as the high seas are an inhospitable environment for electronic components.

“Four out of five encoders failed within a year,” said Sander Lensen, programmer at eL-Tec. During servicing, he and his colleagues repeatedly had to assign an IP address to the new encoders and teach the devices.

Wear-free and plug-and-play
“The new encoder had to be wear-free and enable the replacement of encoders to be carried out by the technical personnel on the Reimerswaal themselves,” explained Dick de Vries, head of the service department at eL-Tec. “We therefore looked for an encoder that does not have any mechanical connection to the winch shaft and is permanently sealed. For this there was only one encoder, and it comes from Turck.”

The encoder is connected to the gateway via an SSI input card - which makes the solution plug and play enabled - allowing the ship’s crew to easily replace the encoder in the event of a fault. The gateway stores the PROFINET address and a new encoder can be put into operation without any additional parameter setting required. This option would not be possible with an encoder with an integrated Profinet interface.

“If the solution becomes established permanently, we will also be using the QR24 in other projects. Up to now it looks pretty good.”